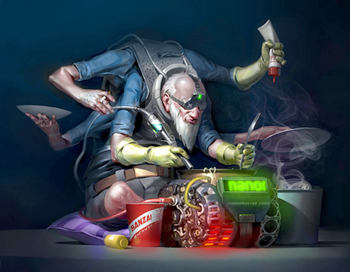 He's a handy man.
Been up since 6:30, two days crowded into one
Put away the dinner dishes and my work still isn't done
If I had three arms, I could do what I need to do
There's too much going on to just get by with two
— Trout Fishing In America, "Two Brains"
Advertisement:

You look in the mirror and see three heads looking back at yourselves with five eyes and seven arms and think to yourselves, how do we septo-wield? Or better yet, how can we write our book, cradle our baby, and make paper airplanes at the same time? Practice, that's how.

It is rarely explained how users of this trope have the coordination to pull all this off in the first place, since normal humans typically lack the skill to perform two different tasks with their hands. Justified in the case of extremely non-human entities which may have evolved to use their excess limbs in many different tasks at once with ease.

Please note this has surprisingly little to do with Excuse Me While I Multitask, if you're thinking about wielding weapons with many arms you still need some form of Multiarmed Multitasking; it just belongs in Multi-Armed and Dangerous. If your extra limbs are for walking, they belong in Spider Limbs or possibly Handy Feet. And then there's if it's just a Vertebrate with Extra Limbs.