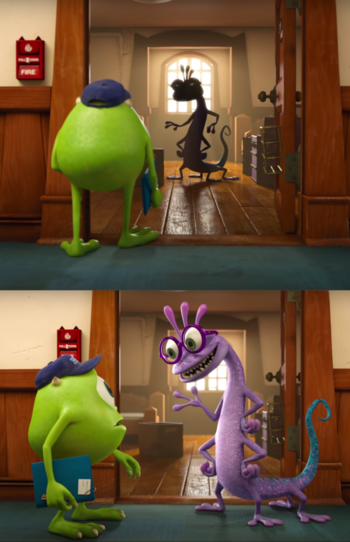 Sometimes, you can tell from a character's first moments exactly who and what they are. A character appears on-screen and immediately kicks a dog, he's obviously the villain. Another appears and his first act is to help a kindly old lady across the street, he's a good guy.

But wait... that guy wasn't actually kicking the dog, he was stomping on a spider that was about to bite it! And that so-called good guy was only helping the little old lady so he could steal her purse once her guard was down!

This is the Bait-and-Switch Character Intro. It's a form of Establishing Character Moment where the character is initially introduced in a certain way, which is then immediately subverted and shown that the character is actually something entirely different.

Naturally, it can go in multiple different directions. A powerful character might be introduced as a non-combatant in order to establish them as a Humble Hero. A villainous character may be introduced doing something nice to establish them as a Villain with Good Publicity, or the opposite used to set up a Hero with Bad Publicity. So on and so forth.

Note, also, that this only counts if it happens as part of the character's original Establishing Character Moment. Simply showing their true colors late in the story doesn't count.