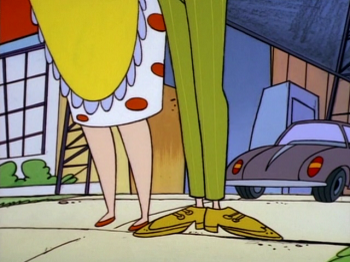 Lady at the zoo: Are you lost? What does your mom look like?
Calvin: From the knees down, she looks just like you.
—Calvin and Hobbes, 7/22/1987

A work with Knee-High Perspective is an animated, graphical, or live action work that takes place in a realistic setting within the human world in which the most of the scenes and action take place ankle, knee, or waist high. The characters are often children, cats, or dogs, but any similar sized or smaller character (often animal, elf, or toy) can work.

If the characters are animals they can be anywhere on the Sliding Scale of Anthropomorphism from Nearly Normal Animal to Funny Animal. Works with babies and very small children as the main characters are often shot from this perspective. This generally results in all the human characters except for babies and toddlers becoming The Faceless.

This type of shot is also known as "Japanese angle" or "Japanese shot," because it mimics the waist-high perspective of someone kneeling in traditional Japanese style. In Latin America it is often referred to by those terms.