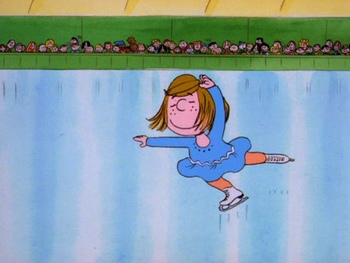 The 19th Peanuts animated special, She's a Good Skate, Charlie Brown first aired on CBS in 1980. As with many of the specials, its plot is adapted from a story arc in the newspaper strip. Peppermint Patty is preparing to participate in a skating competition, with Snoopy acting as her coach. She struggles with staying awake in class, getting a suitable figure skating outfit, and having music that breaks easily.

Since 2010, an edited version of this special has aired on ABC to fill out the one-hour timeslot during their annual airing of Happy New Year, Charlie Brown, presumably as both are set in the winter with Peppermint Patty in a key role. However, the two specials made their DVD debuts on two separate releasesnote Happiness is Peanuts: Snow Days for She's a Good Skate, and the I Want a Dog For Christmas, Charlie Brown Remastered Deluxe Edition for Happy New Year, which WB eventually bundled together in the Snoopy's Holiday Collection boxset.

Tropes for this special include: