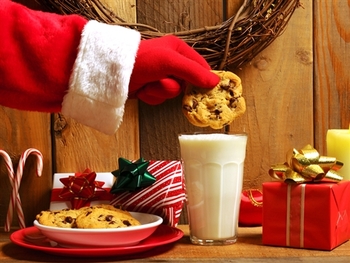 "The cookies are great, but I prefer HO-HOS!"
Calvin: I'm leaving out a sandwich for Santa.
Calvin's Dad: That's nice.
Calvin: What do you think he'd like with that? Some milk?
Calvin's Dad: I think "Santa" would rather have a cold beer.
Calvin's Mom: Dear!
—Calvin and Hobbes, 12/25/88

Characters leaving out treats for Santa Claus on Christmas Eve. This is usually done as a test to see whether he exists, or as a act of good will. The treat differs between countries. In North America it's usually milk and cookies, while in most of Britain it's a mince pie and a glass of sherry or whisky (or a glass of your dad's favourite tipple — funny, that). Sometimes, people also leave food for the reindeer, such as carrots.

The tradition is related to the Older Than Dirt northern European tradition of leaving a food sacrifice for various protective spirits, most importantly the house gnome. House gnomes were later conflated with Saint Nicholas to become the modern day Santa Claus.