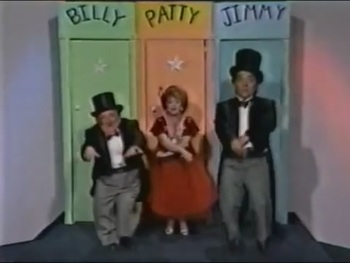 From left: Billy Barty, Patty Maloney and Jimmy Briscoe
There's politics, and sports galore,
Movie stars, and furthermore,
People who do, and people who don't
And people who say, "Who, me? I won't!"
—Excerpt from the theme song
Advertisement:

Short Ribbs was a 13-episode Sketch Comedy series broadcast in Southern California in 1989. Billy Barty developed the series and acted in most of the sketches, along with Patty Maloney and other dwarf actors. Most of the sketches spoofed well-known movies, TV shows and commercial campaigns.

Two of the episodes were viewable on YouTube in 2013, but were removed from the channel shortly afterward. One of them was re-uploaded by a different user in 2014, along with two half-episodes.