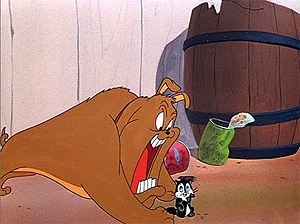 "Feed the Kitty" is a 1952 Merrie Melodies short, and one of Chuck Jones' most beloved shorts.

A bulldog named Marc Anthony encounters an adorable little tuxedo kitten (retroactively named "Pussyfoot") who is unfazed by Marc's attempts to scare him, and in fact takes a liking to Marc as he naps on the dog's back. Marc Anthony takes the kitten home with him, but also tries to hide Pussyfoot from his owner, who is fed up with him bringing trash home.

Not to be confused with Pet the Dog or Feed the Cat.

"Feed the Kitty" provides examples of: