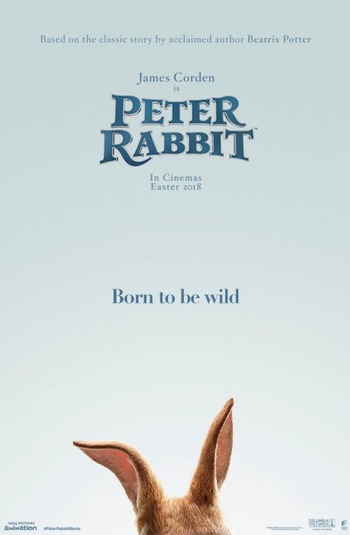 "This is only the beginning. Ha-ha!"
"Once upon a time in a beautiful wood there lived a rabbit named Peter with a blue jacket and no pants."
— Narrator

Peter Rabbit is a 2018 live-action film with CGI characters inspired by Beatrix Potter's classic children's tales. The second feature based on Potter's tales after 1971's The Tales of Beatrix Potter, which featured the Royal Ballet, the movie stars James Corden as the voice of Peter Rabbit, Domhnall Gleeson as Thomas McGregor, Daisy Ridley as Cottontail, Margot Robbie as Flopsy, Elizabeth Debicki as Mopsy, Rose Byrne as Bea, and Sam Neill as Mr. McGregor.

A sequel, Peter Rabbit 2: The Runaway

, was slated for release on April 3, 2020, but was ultimately moved to January 15, 2021 due to the coronavirus pandemic closing theaters temporarily. Then, due to the continued effects of the pandemic, the film was delayed again, eventually releasing in Australia on March 25, 2021. It will be released in the United Kingdom on May 21, 2021, and in the United States on June 18, 2021.