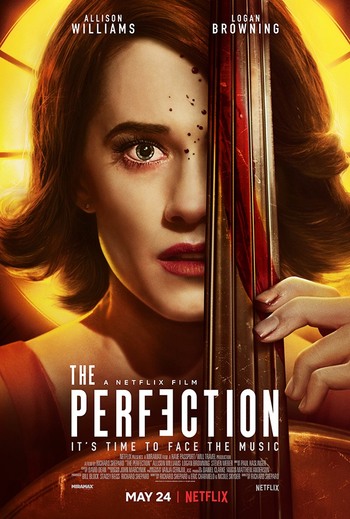 It's time to face the music.
Advertisement:

The Perfection is a 2019 psychological horror-thriller film directed by Richard Shepard. The movie premiered at Fantastic Fest, and was purchased by Netflix one week later to be released worldwide through the platform.

Charlotte Willmore (Allison Williams) was a prodigy on the cello in her teenage years, on the course for a promising career that she suddenly quit to take care of her terminally ill mother after she suffered a stroke. After her mother dies years later, she reintegrates with her former music academy's activity by reaching out to academy head Anton and traveling to Shanghai to help select a new student.

There, she meets Elizabeth "Lizzie" Wells (Logan Browning), the new star pupil of the academy — and essentially her replacement. They hit it off immediately, and Lizzie invites Charlotte on vacation for her first break in a long time. However, this trip only proves to be the beginning of both musicians traveling down an increasingly sinister path with shocking consequences.

Since this film is built on major plot twists, watch out for spoilers.