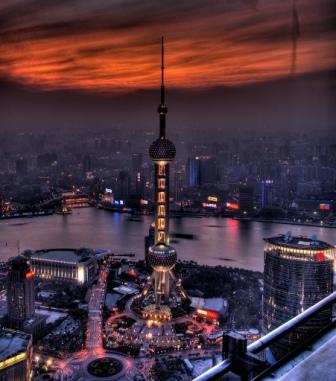 This is not a Baen cover for a science-fiction novel. This is the actual view from Pudong.
"Nothing more intensely living can be imagined."
— Aldous Huxley on Shanghai
Advertisement:

Shanghai (上海, lit. "Over/Above/On [the] Sea") is a young city by Chinese standards. Until the 1840s it was a quiet fishing town, but when British forces seized it in the course of the First Opium War in 1840, they realized its potential as a trade emporium, given its location near the mouth of the Yangzi River. At the conclusion of both wars, Foreign powers were conceded 'settlements' in and around the country's more marginal coastal and river areas. Shanghai was one of these places. The 'International Settlement' was formed in 1863 with the merger of the British and American territories, while the Concession Française remained independent. Imperial Japan gained its own concession in 1895, with the conclusion of the Sino-Japanese war in their favour. The old town, meanwhile, remained under Shanghai-nese jurisdiction.

This complicated political situation was a boon to the criminal underworld, Late-Imperial/Early-Republican Shanghai was notorious as the playground of powerful triads. All manner of illegal activity thrived, most famously prostitution and opium smuggling. Shanghai was referred to as "the greatest brothel in the world" and "the Whore of the Orient", and a common joke among visiting missionaries was that "If God allows Shanghai to endure, He'll owe Sodom and Gomorrah an apology." When Chiang Kai-shek marched into the city in 1927, the most powerful man in the city was crime Lord Du "Big Ears" Yuesheng, leader of the "Green Gang".

The freewheeling atmosphere, in which everyone was on the take and everything went, was a magnet to artists and intellectuals, and throughout the inter-war years Shanghai was one of the most culturally dynamic cities in the world, earning the city the moniker "Paris of the East". It was also a hotbed of political activism, witnessing the birth and death of the Urban-Proletarian Communist movement; it was both the founding place of the (first) Chinese Communist Party in 1921, and Chiang's primary target in 1927's April 12 massacre of all the city's Socialists (as identified and disposed of by Mister Du Yuesheng and his Green Gang).

When the economic warfare between China and Japan came to a head in 1932, Shanghai briefly became embroiled in a scuffle that became known as the Battle of Shanghai; Chiang's government had just attempted to put extremely high tariffs on Japanese goods, a move which came at the high point of a widespread boycott of Japanese goods and strikes among those working in Japanese-owned businesses. At the end of it Chiang and Tokyo managed to reach a peaceful agreement whereby the Guomindang would reduce its tariffs again - thereby exhausting Chiang's political capital and making it basically impossible for him to negotiate that kind of peace with Japan again (for fear of losing all credibility). The National Revolutionary Army/NRA's performance in the scuffle (in which almost no fire-support, i.e. artillery and air-strikes, was used) illustrated very clearly to Chiang the complete inadequacy of the Guomindang's forces compared to Japan's and spurred him to initiate a ten-year programme of military reform. While it was relatively easy to match Japanese levels of armament and equipment - artillery and aeroplanes aside - by buying weapons factories (many of which were set up in the Nanjing-Shanghai area) from Nazi Germany, creating an effective General Staff and installing competent and obedient commanders was still very much a work in progress five years later.

Within a couple of months of the Guandong Army taking Beijing in the Summer of 1937, the fighting spread to Shanghai. We used to be sure this was Chiang's idea, as a means of weakening the IJA's southward advance from Beijing, but now we're not so sure. It appears that the NRA Commander assigned to Shanghai was in fact a Soviet agent acting on orders from Moscow to try to take the fighting south (and away from the Chinese-Japanese-Mongolian-Soviet border), much as the Japanese Commander who oversaw the IJA's resounding defeat Nomonhan/Kalkhin Ghol also appears to have been one. However the Second Battle of Shanghai actually started, it constituted one of history's most bizarre spectacles as Japan continued to deny that the million-man four-month battle (with artillery, tanks, 'planes, and warships) did not constitute a war. Both sides had to be careful in their use of fire support due to the presence of the foreign settlements - the sinking of an American river gunboat USS Panay by IJA aircraft while she was evacuating people from the American embassy in Nanking/Nanjing made things very awkward at one point - which remained mostly unmolested until they too were occupied when Japan entered the wider war in 1941.

The city's post-war economic recovery was initially helped by the incompetence and corruption of Chiang's regime, which oversaw high inflation which stimulated businesses. However, while this helped the city's debtors (as the real value of their debts was reduced by the decreasing value of money) it crippled its lenders and this reluctance to lend money (because it was getting harder and harder to make profits from lending) eventually resulted in net economic stagnation during the hyper-inflation spiral of 1947 (which completely wiped out all debt and destroyed the entire Shanghai-based banking sector). While a new currency, the Gold Yuan, was instituted the Guomindang's inflationary policies hadn't changed and it was only when the Communist People's Liberation Army (PLA) fought their way into the city that it ended. The PLA made everyone, at gunpoint, stop creating inflation by forcing everyone to buy and sell everything at fixed places and prices under direct PLA supervision and the threat of death. The PLA also broke up the strikes at Shanghai's factories, dismantled the trade unions, and got production going again. While the policy of 'price controls' (of fixed prices on all goods) wasn't new, the Communists actually had the power to implement it in the countryside (which only they had enough militia, and the willingness to use brutal force, to police) as well as in the cities. A whole host of policies instituted from the city's capture until the first five-year economic plan were exact clones of Guomindang policies, albeit instituted with a degree of ruthlessness and efficiency that Chiang's regime hadn't been able to match since 1937.

(1):"Are there foreign banks operating in Shanghai?"
(2):"Yes."
(1):"And whom are they serving?"
(2):"The international bourgeoisie and foreign enterprises which so far we have not touched."
— 16th December 1949 conversation between I.V. Stalin (1) and Z.D. Mao (2) note  conversation translated in real-time by N.T. Fedorenko and Shi Zhe (Karskii). Archival record of conversation translated from Russian to English by Danny Rozas, printed on p.319 of ed. by Odd Arne Westad, Brothers in Arms: The Rise and Fall of the Sino-Soviet Alliance, 1945-1963 (Stanford, 1998)

Though they came to power on the basis of rather progressive and tolerant policies - having learned from The Russian Civil War to avoid antagonising anyone to the point that they would take up arms against them while their support might still sway the outcome of the war - the Communists' had always viewed Shanghai as a capitalist cesspool of decadence. Post-war, they waited until they had built up a loyal base in the countryside (by organising lynch-mob killings of all landlords and giving their land to the poor) and the country had returned to a 1937-level of economic activity before they packed off Shanghai's entire prostitute, banker, trade-unionist, liberal, and socialist (beause only Marxist-Leninist Communist was ideologically acceptable) populations and sent them to re-education camps. Shanghai's past as a hotbed of free thought and inter-national contact was forgotten and even actively destroyed during the Maoist era that followed, particularly the Cultural Revolution.

However, in 1991, Deng Xiaoping granted the country greater economic freedom, and Shanghai has since then grown into a shining powerhouse of unrestrained business activity. In a few short years, the Pudong financial center has sprung up from the ground on the Eastern shore of the Huangpu river, and is now a glittering collection of postmodern skyscrapers as impressive as Hong Kong's. One of the most well-known is the Oriental Pearl Tower (it's that big pointy thing in the picture at the top of this page). It is quite astonishingly ugly to look at in real life.

And its hosting of the World Expo has revitalized the event itself, pushing more than any in the recent past have into promoting it and getting countries to attend. It's notable for being the first World Expo to host a North Korean pavilion.

Shanghai's vibrancy is now mostly restored, and it's the biggest city in the People's Republic. Shanghai people are often stereotyped for their snobbishness due to their pride in the city's international fame and national significance. It is one of the four municipalities alongside Tianjin, Beijing and Chongqing.

Not to be confused with "shanghaiing," which is a form of maritime kidnapping that was practiced in the 19th century before the advent of steam ships, or with Shanghai, the first Mahjong Solitaire game for computers.