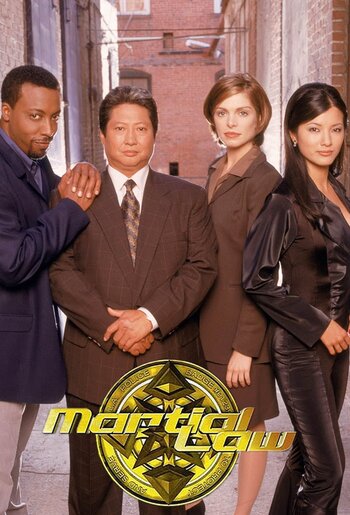 The season 2 main cast: Arsenio Hall, Sammo Hung, Gretchen Egolf, and Kelly Hu.
Sammo Law, a top flight cop and hand-to-hand combat instructor from Shanghai, China comes to Los Angeles to search for a crime boss and an undercover cop whom his department lost contact with. Once there, his temporary mission is turned into an ongoing exchange position and he is partnered with a pair of cops and is met with a clash in culture. As they battle the criminal elements of the city, his skill in martial arts proves to be a big help.
Advertisement:

This 1999 show was largely inspired by the mid-90's Jackie Chan craze, and the fights scenes were in the same vein of being fast-paced and filled with "blink and you'll miss it" actions. Not coincidentally, Sammo Hung is also a long time friend of and frequent collaborator with Jackie. Sammo also had a noticeable brevity in speaking lines that were in English, due to a difficulty grasping a language foreign to his own cultural dialect.

If you're looking for the trope where someone declares martial law or a state of emergency, you'll want Emergency Authority. You might also have been looking for the comic series Marshal Law. Either that, or a 1991 movie with the same title starring Chad McQueen.