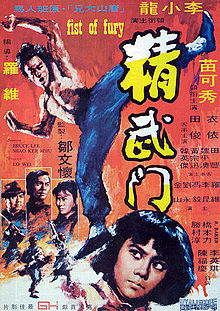 Fist of Fury (Chinese: 精武門; aka The Chinese Connection and The Iron Hand in the United States) is a 1972 Hong Kong action martial arts film written and directed by Lo Wei. It starred Bruce Lee in his second major film after The Big Boss.
Advertisement:

Set during the Second Sino-Japanese War, Bruce Lee plays Chen Zhen, a student of Huo Yuanjia, who fights to defend the honor of the Chinese in Japanese-occupied Shanghai and to bring those responsible for his master's death to justice. The movie has themes of racism and the consequences of revenge.

Not to be confused with The Big Boss, which was confusingly released as Fists of Fury in some territories.

The movie would be remade in 1994 as Fist of Legend, starring Jet Li as Chen Zen.

Has a belated sequel, starring Donnie Yen as Chen Zen, titled Legend of the Fist: The Return of Chen Zhen in 2010, which retcons Chen's fate completely in an Alternate Continuity.