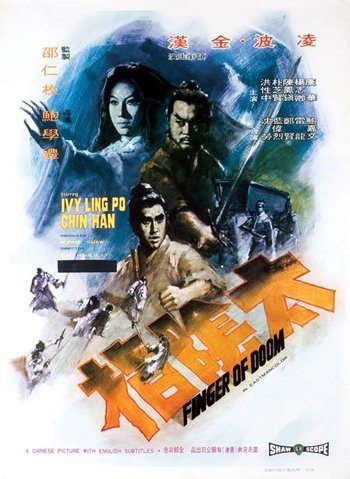 Finger of Doom is a 1972 Shaw Brothers wuxia film starring Chin Han, Ivy Ling-po and Korean actress Park Ji-Hyeon as a villainess, being her only notable role she made with Shaw Brothers studios.

A powerful sorceress, Madam Kung Sun, serves as the film's unique and dangerous main villain: she is a rogue martial artist who had turned to evil after learning the skill of the Finger of Doom. Using her new powers, which can kill her victims with a single touch before reviving them into her zombie serfs, Madam Kung Sun is a threat to the martial world, and it's up to lawful swordsman Lu Tien-Bao - on his own quest for vengeance - to defeat the powerful Madam.

Finger of Doom contains examples of: