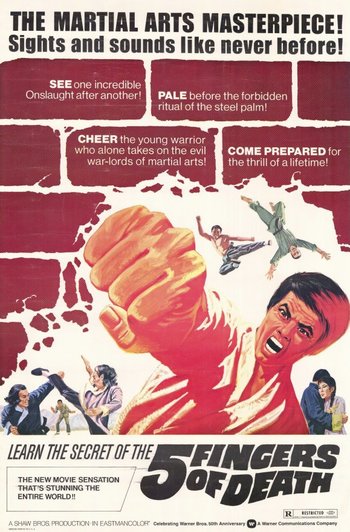 There are as many taglines as there are alternate titles for the film's foreign release, apparently!
Advertisement:

Five Fingers of Death, also known as King Boxer, The Iron Palm and Invincible Boxer in certain international releases, is a 1972 Martial Arts Movie released by Shaw Brothers, and is notably one of the studio's first films that is granted a wide release in North America. Together with Bruce Lee's Fist of Fury, released a few months later, this is one of the films which kicks off popularity of kung-fu films for western audiences.

Lo Lieh, who starred as the lead after years of playing extras or bit-part villains for the studios, effectively kicked off his career as one of Shaw Brothers' leading man. Lo plays Chi-Hao, a budding young kung-fu trainee under the tutelage of Master Sung Wu-Yang. Chi-Hao and Sung's daughter, Sung Yin-yin, are lovers, but Chi-Hao must prove his worthiness by partaking in a kung-fu tournament in the big city. However, things are made complicated by a dangerous, challenge-seeking Blood Knight, Chen Lung, as well as a conspiracy involving a rival martial arts school working with a Japanese gang.

This is notably the film that got Quentin Tarantino interested in kung-fu cinema. Yes, really