Step into the Blinding Fight 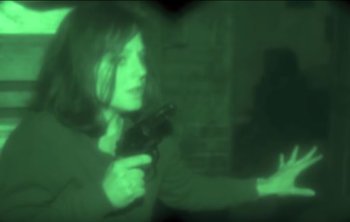 Trapped in a pitch-black basement plus being stalked by a Serial Killer equals Nightmare Fuel
Advertisement:

The Hero cannot see due to the villain's use of magic or technology to shut off, put out, or destroy light sources, thus pitching an area in darkness. Sometimes a character literally summons darkness or a mist or fog with magic or superpowers in order to invoke this. For the most disturbing applications, the hero's eyes are damaged, or worst yet: removed. In any case, this trope is when one character cannot view another character as they fight. From one direction a punch flies and hits their left cheek. From another direction a kick slams into their right knee. Uppercut to the chin; knee to the gut; roundhouse kick to the back. The hero gets his ass kicked.

If the method of blinding an enemy is to throw sand, a chemical, or some other foreign substance into their eye, then that's A Handful for an Eye, a subtrope of this one. If brightness is used to defeat a character, they've been Blinded by the Light.

Often invoked by the blind master to teach his pupil to not rely so much on his visual senses. A frequent occurrence in the Stealth-Based Game genre, as well as many video games with a stealth mechanic and a specialty of the Ninja.

During the fight between Kratos and Thor's 2 sons (Magni & Modi), they have a combination attack that blinds you while they circle you and try to attack.

During the fight between Kratos and Thor's 2 sons (Magni & Modi), they have a combination attack that blinds you while they circle you and try to attack.