Strolling Through the Chaos 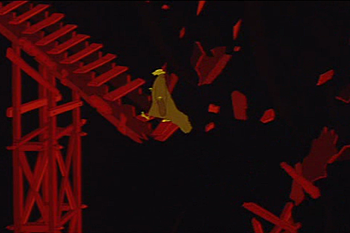 I don't think you noticed, but those stairs you were walking on just exploded...note Next the stairs blow up completely, and he's still ascending them as if nothing happened.
"He was one of those guys that had that weird light around him. You just knew he wasn't going to get so much as a scratch here."
— Captain Willard describing Colonel Kilgore in Apocalypse Now
Advertisement:

When the bullets, fists, or pies are flying, expect one character to be able to wander through it all without so much as a nick, a scratch, or a drop of cream.

Usually Played for Laughs, this trope will have one person able to maneuver about the chaos while completely avoiding damage. This could be either through skillful dodging or simple blind luck. Often the character will take advantage of the pandemonium. If a bar has erupted into battle royale, this guy will be leisurely enjoying the top-shelf booze while bodies slide along the bar and fly into the stacks of bottles behind him. Sometimes they may try to play peacemaker. Other times they are simply trying to find the nearest exit.

Sometimes the trope will be played seriously as our hero dodges his way through a vicious firefight to reach some important goal. If they are hit at all it will be just before the final task that accomplishes the mission.

Variants of the trope can find the person caught between two combatants and ducking just as their punches slam into one another's faces. Very often the last punch or pie thrown will be the one the character can't avoid.

May be combined with The Slow Walk when taken seriously.