Film / A Bridge Too Far 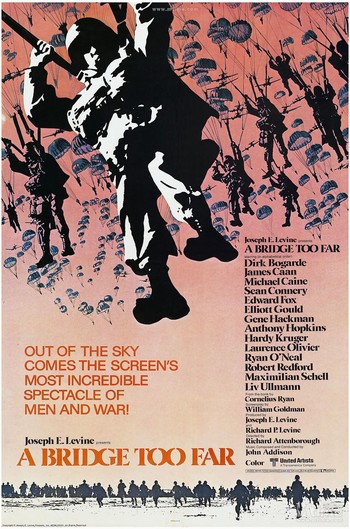 It tells the story of Operation Market Garden (Sept. 17-25, 1944), an audacious, but flawed — and ultimately unsuccessful — plan to use British, American, and Polish paratroops and British armoured divisions to capture four bridges in the Netherlands. Bernard Law Montgomery hoped that these could be used by the British quarter of the Western Allied force in France to invade northern Germany, forcing the Germans to reinforce that sector with forces pulled from less vital fronts such as Hungary or Italy and perhaps ultimately enabling Germany's defeat within the next six months.

In addition to the All-Star Cast, it also might qualify as the biggest all-realism movie, as the producers went to great lengths (and money) to gather old vehicles and equipment, including 11 Douglas C-47 Skytrain (Dakota) WWII aircraft, along with getting NATO troops with the old fashioned parachutes jumping out of them for the film. It was also the first war film in which actors were put through boot camp prior to filming. The film cost $22 million in 1977. Compare that with Star Wars which also came out in 1977 and cost $10 million.

A Bridge Too Far provides examples of the following tropes: