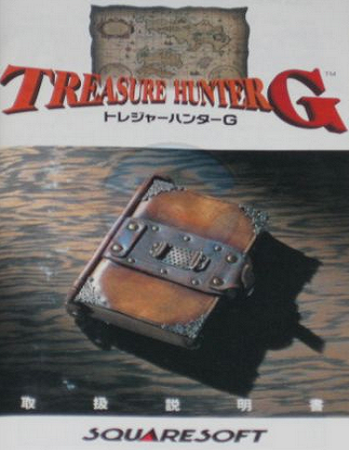 "All of the world is an adventure."
These were the words of the greatest treasure hunter, Gamrius VI.

The last game ever released for a Nintendo console by Squaresoft before merging with Enix (and developed by Sting Entertainment), Treasure Hunter G is a 1996 Turn-Based Strategy that few people know because it was never released outside Japan. Despite its obscurity, the game had a surprisingly high budget with both an excellent soundtrack and early Mode 7 3D graphics which allowed for claymation-esque sprites that actually looked better than many early PS1 games.

The story is simple: Our heroes are two brothers (Red and Blue), a girl (Rain) and a monkey (Ponga), who have to stop the nefarious Dark Lord from resurrecting Bone Dino because... something! The game's main appeal comes from its battle system, which combines Turn-Based Combat with a certain level of strategy, and unique implementation of items and trap spells.

Incidentally, the game has also been made available for download on the Wii's Virtual Console service... but once again, only in Japan. That's right, No Download for You.