Film / Bring Me the Head of Alfredo Garcia 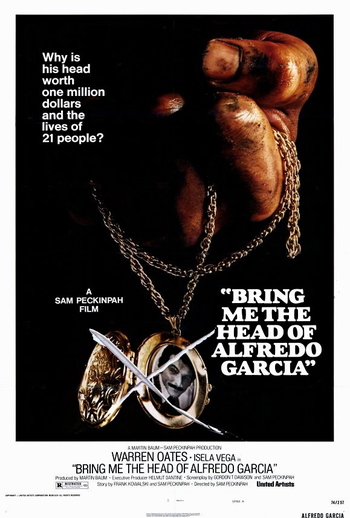 "There ain't nothing sacred about a hole in the ground or the man that's in it. Or you. Or me."
—Bennie
Advertisement:

A New Old West film from Sam Peckinpah, released in 1974. At the time, it was considered bleak and violent even by Peckinpah standards, it has since had a resurgence of popular and critical opinion. Peckinpah considered it his best and most personal film.

It begins with a feared Mexican landowner, known only as 'El Jefe' ('The Boss') brutally interrogating his pregnant teenage daughter over the identity of the father of the baby she's carrying. Upon learning that it was a trusted underling, El Jefe orders his henchmen to "Bring me the head of Alfredo Garcia". This information eventually gets back to Bennie (Warren Oates), an American ex-pat who ekes out a living as the piano player in a dive bar, who in turn learns from his prostitute girlfriend Elita (Isela Vega) that Garcia is already dead, having been killed in a drunk driving accident some weeks previously. Bennie decides that he can earn some easy money by digging up Garcia's corpse, removing the head and taking it to El Jefe for the bounty, and drags Elita along to help him.