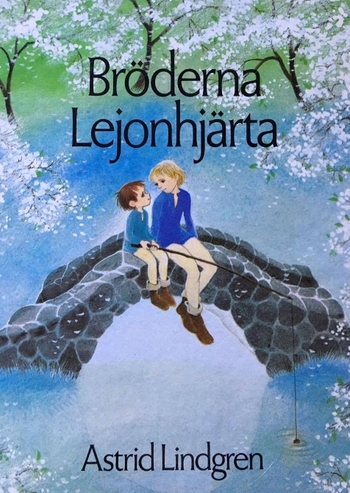 “Didn’t I say that wherever you went I was going too?” I asked.
“Yes, that’s what you said,” said Jonathan, sounding quite pleased.
“Because I want to be with you,” I said, “even in a bottomless pit in the underworld.”
Advertisement:

The Brothers Lionheart is a children's fantasy book written by Astrid Lindgren. The story touches on a number of important themes that are surprisingly deep for a book written for children, such as death, tyranny, rebellion and courage. But the main theme of the book is rebirth.

The story begins by introducing us to the brothers Lejon (Lion), the sons of a poor seamstress some time during the early 20th century. The younger brother, Karl, also known as Skorpan ("Rusky"), is dying from tuberculosis. He describes himself as a homely, foolish and scared boy. The much-admired older brother Jonatan is like a prince from a fairy tale; he is always there to comfort Skorpan, and he even dies saving him when their house burns down.

Before his death, Jonatan told Skorpan about Nangijala, a land still in the time of campfires and fairy tales, where Skorpan can have adventures from morning to evening and at night too. When Skorpan dies he wakes up in Cherry Valley in Nangijala and finds his brother there.

At first Nangijala looks like a perfect place to spend the afterlife, but that is before Skorpan learns about the evil conqueror Tengil and his soldiers, and the death that comes from the dragon Katla. The brothers (who soon become known under the name Lejonhjärta - Lionheart - in the afterlife) spend the rest of the book aiding the rebellion against these menaces.

The Brothers Lionheart contains examples of: