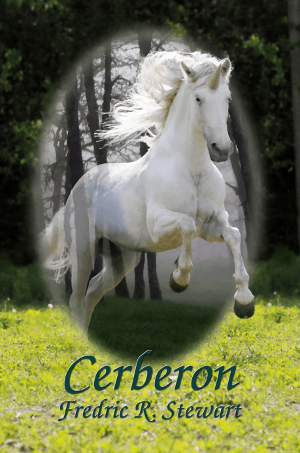 The first published novel by Fredric R. Stewart, Cerberon is unusual blend of Regency Romance and High Fantasy. The novel opens in Regency England several years after the conclusion of the Napoleonic Wars, with George making a final, desperate, and futile attempt to convince a wealthy widow to marry him, with Cerberon's begrudging assistance. After being kicked off of the widow's estate, George and Cerberon soon encounter another widow, Margaret, who is significantly less wealthy than the ones George had been unsuccessfully courting. George promises to escort her and her children to their destination, which they then discover is America. They decide to follow through on this promise by taking them through an alternate fantastic world full of magic, strange creatures, and danger. George enters into a romantic relationship with Margaret while Cerberon learns more about what it means to be a unicorn than he ever suspected.
Advertisement:

On their journey, they receive help from a villainous elven wizard that they're afraid to refuse, since they already know about The Fair Folk. Other strange creatures join the traveling group, forming a Ragtag Bunch of Misfits each going along for their own reason. They discover the country they are traveling through is marked for annihilation by the Dragon Queen, the supreme ruler of all the world's dragons. An epic battle ensues, while George and Cerberon seek to escape it, their only duty being the safety of their charges. They eventually make it to America, bringing with them guests from the fantastic world, including a dragon and a centaur, but antebellum America is not what they had expected.

While the story arc of Cerberon is complete in this novel, it is clear at the end a new arc is beginning, and work on a second novel, Cerberon's Herd has been announced by the author.