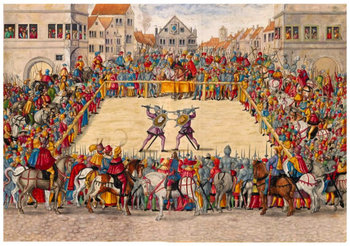 Judicial duel between Marshal Wilhelm von Dornsberg and Theodor Haschenacker in the Augsburg wine market in 1409.note Painting by Jörg Breu d. Jüngere and Paulus Hector Mair, c. 1544.
"Trial by combat: Deciding a man’s guilt or innocence in the eyes of the gods by having two other men hack each other to pieces. It tells you something about the gods."
—Tyrion Lannister, Game of Thrones
Advertisement:

Traditionally, this is one of the three basic legal ways of resolving a conflict or disagreement between two individuals or legal entities, the other two being Trial by Ordeal and Trial by Arbitration (the only one recognised by modern governments, and for which we have plenty of coverage).

The idea behind it is very simple, which is probably why it's been used by numerous cultures throughout history: someone is accused of a crime, or two parties are descending into conflict over a matter of opinion or policy. In order to resolve this issue with the minimum of bloodshed, an individual is chosen to represent each side, and they fight. Winner takes all.

This works, supposedly, because Right Makes Might. Whichever side is in the right will win a fight, either because Good Hurts Evil, or because of some kind of divine intervention. This practice was Fair for Its Day, as the divinely sanctioned agreement that the matter was settled definitively no matter the outcome was a good way of preventing generations of blood feuds. Naturally, this idea is passé now, and so the trope is associated with medieval and fantasy settings.

Note that there is no need for either the accused or the accuser to fight for themselves. Just as often, they will choose a champion to fight on their behalf, which is arguably good, because otherwise bullies could handily go around accusing pipsqueaks of crimes against them and beating them up for the recompense. On the other hand, this system gives a major advantage to the rich (or those most willing to spend money on the trial) because these champions often fight for payment, rather than justice, and whoever can hire the best fighter will usually win.

This also says a lot about characterization of those who partake in the death match since an accused protagonist generally doesn't allow others to risk death on his/her behalf, but would rather fight his/her own battles. Alternatively, a heroic character may vouch his/her own life in defense of the accused, especially if said accused is unable to fend for him/herself. On the other hand, many antagonists are all too selfishly willing to avoid severe injuries or death from combat by having a more physically inclined minion to fight on their behalf.

Note also that these fights don't necessarily have to end in death, though they often do, especially if the accused is suspected of a capital crime.

If the trial takes place between representatives of opposing armies, you have a case of Combat by Champion. If the two are fighting over an insult, it's going to be a Duel to the Death, with all of the Throwing Down the Gauntlet, etc. Be aware of the difference between this and Duel to the Death. Although they are similar and in many cases overlap, the trial is always sanctioned by the pervading culture whereas a duel is sometimes illicit. Also, the way of engaging a trial is different. Whereas a duel can be arranged entirely between the conflicting parties, a trial must be instigated at the behest of some authority figure (who will preside over the fight like a referee and may him/herself serve as champion, especially if he/she is of a Proud Warrior Race), and there have to be witnesses to verify how things went down.