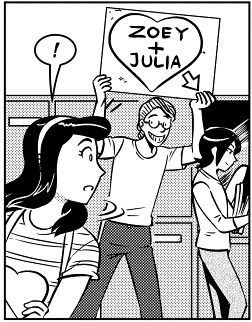 It DOES have potential.
"Because it's obvious you and Agent Booth were attracted to each other. I mean, a blind man could see that. I just couldn't understand why you two just didn't rip each other's clothes off. I mean, just get all butt-naked and– Oh, my God. Oh, my God. Oh, my God. Uh. I'm– I'm sorry. It just popped out, okay?"
— Clark Edison, Bones
Advertisement:

A character in a story actively ships two other characters in the story, trying to make them realize their true feelings while they're both still claiming that She Is Not My Girlfriend.

This character could be someone in love with one of the characters in the pairing who wants their beloved to be happy, or they could be a very good friend, or maybe they're just someone who likes playing matchmaker. If everyone in the cast is shipping the same pairing it becomes a case of Everyone Can See It. May overlap with Love Informant.

Contrasting with The Matchmaker, the Shipper on Deck is usually a secondary character and the characters shipped are the protagonists of the story, and likely to be the Official Couple. Also contrast with Relationship Sabotage, where someone is trying to undermine a relationship that already exists (although the two can be part of the same plot quite easily, if the idea is to get someone out of one relationship and into another). Also contrasts with Shipping Torpedo, in which a character is against a pairing but may or may not go so far as to act on it, or Matchmaker Crush, when a character starts out trying to help one character hook up with another, but ends up falling in love with the person they were helping.

If the shipper has reasons beyond thinking they're a cute couple, they're a Shipper with an Agenda.

Beware a Creator's Pet if this is the writer trying to reinforce a disliked pairing.