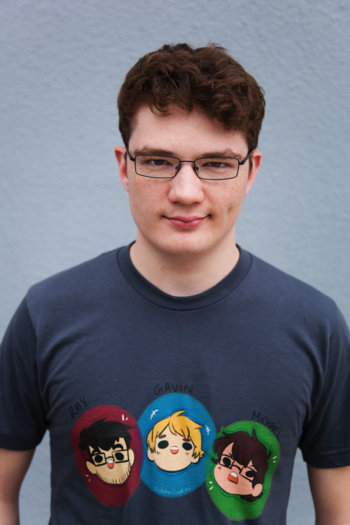 "It's a jungle in Boston!"
— Michael imitating Randy Newman's ''It's a Jungle Out There'' during an Assassin's Creed video
Advertisement:

Michael Vincent Jones (born July 24, 1987) is an American actor from Woodbridge, New Jersey who works for Rooster Teeth Productions, mainly for their Achievement Hunter division. Jones first gained attention on Reddit for a video of him getting frustrated at

Crackdown 2, which led to his employment by Rooster Teeth. From there he started Rage Quit, a series named after the trope which he complains about frustrating video games until he, of course, quits in rage. In Achievement Hunter, he is the de facto leader of Team Lads, which includes himself, Gavin Free, and (until April 2015) Ray Narvaez Jr, the last of whom Michael was already friends with well before their employment. Within the rest of Rooster Teeth, he appears in Immersion (as a test subject alongside Free), Ten Little Roosters (as a fictionalized version of himself), Camp Camp (as Max), RWBY (as Sun Wukong), Lazer Team (as Zach) and X-Ray & Vav (as Mogar).

Outside of Rooster Teeth, he runs a podcast called the Internet Box (which other Rooster Teeth members appear on), provides his voice as Sting Eucliffe for FUNimation's dub of Fairy Tail, and made appearances in The Fine Brothers' YouTubers React. He is also married to fellow AH employee Lindsay Jones (née Tuggey) and they had their first child on May 24, 2017, a beautiful daughter named Iris Elise Jones.