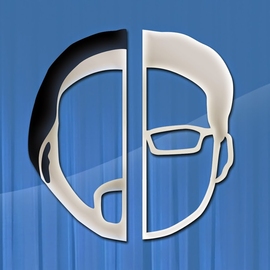 An earlier logo of Fine Brothers Entertainment, featuring half outlines of the brothers' faces. Their current logo is the company's initials with a lowercase e.
Advertisement:

The Fine Brothers, Benny and Rafi Fine,note Benny's the one with the glasses, Rafi's the one with the beard are producer/directors on YouTube with their own channel. They produce sketches, sitcoms and reality-themed shows with a growing Production Posse. Their productions include:

They are also branching into television production, by adapting the React concept into a show called React To That on Nickelodeon, which debuted on December 15, 2014, as well producing and hosting Six Degrees of Everything for TruTV. As of this writing, they are currently planning an upcoming original series for Freeform.

Tropes across their works include: