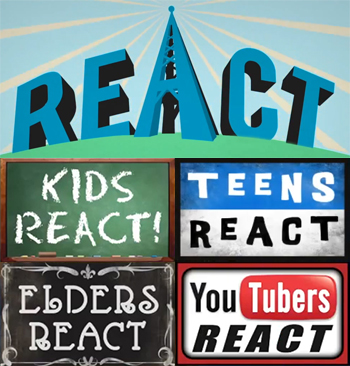 React is Exactly What It Says on the Tin; various people of either different age groups or Internet fame are show viral videos, popular songs, YouTube stars, video games, technology, and so on, and react to them. The franchise was created by the Fine Brothers (Benny and Rafi Fine) and is produced by the company they founded, currently known as React Media.

As of 2018, the React franchise currently comprises eight series (along with two discontinued series):

The React YouTube Channel also produces several spinoff segments featuring many of the cast members of the main shows:

On January 27th, 2016, the Fine Brothers released an announcement

of a new project called React World that was intended to license the React brand to other creators that want to do react videos in the same vein as the brothers. However, this announcement was met with extreme backlash, with many people in outrage over what seemed like an attempt to claim profits over a whole genre of YouTube videos that they didn't even make. Although the channel suffered for quite a while

, things seem to have gone back to normal, since they ultimately issued an apology and have cancelled plans for "React World"

There is also a React YouTube channel as the current home for Kids, Teens, and Elders React's bonus videos, as well as special series featuring the reactors from those shows, over here

. Finally there is the FBE2 channel

that features behind the scenes footage, Studio Life blogs, the FBE Podcast, and community updates.

Right now, the current alternating schedule for the series is Teens React or YouTubers React on Sundays, and Kids React, Elders React, or Adults React on Thursdays.

So what examples of tropes have been used in the React shows?

Morgan: "Thanks for reading!"
Eric: "Let us know in the comments what we should check out next!"
Don: "If you liked this article, give it a big thumbs up!"
Royel: "An' you gotta subscwibe or the tropers will break into your kitchen and eat all your cookies."
Anthony Padilla: "And while you're at it, may as well subscribe to all of us."
Ian Hecox: "Especially the one with the two brunette guys. (not-at-all-subtle pointing) Right there. There. See that? That right there."
Vera: "To watch deleted reactions, click the box below."
Maksim: "Das vedanya!"
Lia: "Gimme a sec..." (staring into the monitor, clicking a few times) "No, later. (Beat) I'm just kidding, bye everybody!" (giggling, goes back to clicking)
(Fade to Black)