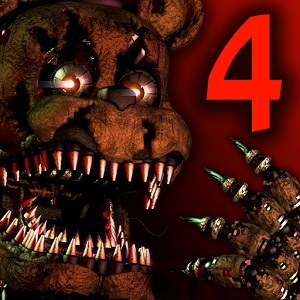 Ready or not. Here. We. Come.
"What have you brought home?"
— Trailer
Advertisement:

Hello, and welc… well, I guess there's no reason to welcome you in your own home. But hey, congrats; you're going to a party at Fredbear's Family Diner! What? You don't like it there? The animatronics creep you out? Well, don't worry, it's not like they can just crawl into your house whenever they want to, right?

Except they can — and they do. For some reason, they look mean and nasty… oh, and they're coming for you. Fortunately, you can fend them off with your flashlight and keep them out of your room with your doors if you see or hear them coming. Just survive for five days until you can go to your party and hopefully everything will turn out fine!

Five Nights at Freddy's 4 is the fourth installment in the Five Nights at Freddy's horror-themed strategy game franchise by Scott Cawthon. The game was released on July 23rd, 2015. This game is vastly different from the previous installments: Rather than giving you cameras to monitor, this game lets you move around your bedroom, letting you check your doors, bed, and closet — and those animatronics that used to stand still when you looked at them now move freely even if you're staring them right in their creepy glowing eyes.

and buy the game on Steam

The game was originally intended to be released on Halloween, but since the base game has already been completed, Scott has since used this date for two releases. The first release is a content update to the base game, which includes

a cheat menu, challenge modes, and a twist to a "familiar minigame". The second release is a special "Halloween Edition" of the game, with changed characters and other cosmetic features in celebration of the holiday. Unlike the base game, Scott has outright stated that the Halloween Edition is not canon.

What tropes do you think you are reading?