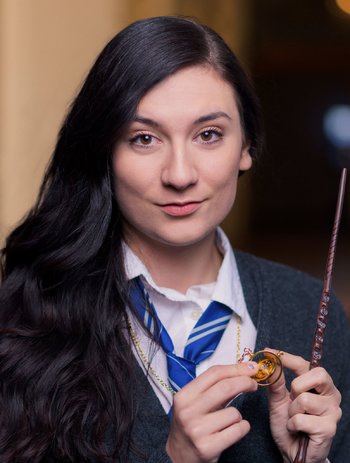 A woman of a thousand voices who's also a magical geek too.
Advertisement:

Anna Stewart Brisbin (Born September 13th 1991), more commonly known as her YouTube name Brizzy Voices, is a voice actor and Youtuber. She got her start by doing voice impressions

of the original 151 Pokémon on her YouTube channel and from there has climbed her way to voice acting, mostly in video games.

She also has two podcasts: Fantastic Geeks and Where to Find Them with her best friend and fellow Harry Potter fan Tessa Netting, and Digital Sky, where she serves as the narrator, as well as having a role in one episode where she was not on narrator duty for season one, but she did come back in a guest appearance for the second season. She is also part of the Cast Party podcast series where she and three others end up in the world of Dungeons & Dragons through magical mishap.

She also does Twitch here.

To hear her voice impressions, her YouTube page is here.

Voice roles that Ms. Brisbin have done include:

"What Up World, it's me, Brizzy and these are my tropes!"

If you made it this far and you haven't already, subscribe, you might as well, and I'll see you next time with a brand new trope. Bye!