Though this is a remake of a game from 1997, there are enough differences in the plot that spoilers from that game may not necessarily apply here. Whether you know the events of the original Final Fantasy VII or not, tropes below will spoil some of Remake's new twists and turns. Read on at your own risk! 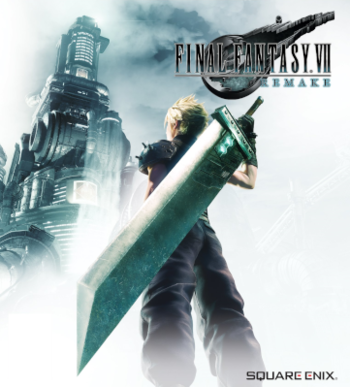 The Legendary Becomes Real
Long ago, we looked upon a foreboding sky. The memory of the star that threatened all burns eternal in our hearts. In its wake came an age of silence. Yet with each fond remembrance, we knew those encountered were not forgotten. That someday, we would see them again. Perhaps it was no more than wishful thinking. But after the long calm, there are now the beginnings of a stir... The reunion at hand may bring joy. It may bring fear. But let us embrace whatever it brings. For they are coming back. At last... The promise has been made.
— Announcement trailer, E3 2015
Advertisement:

Final Fantasy VII Remake is the first entry of a three-part Video Game Remake series of the teeth-shatteringly popular 1997 PlayStation RPG, Final Fantasy VII, developed by Square Enix for the PlayStation 4. It is the fifth entry in the Compilation of Final Fantasy VII and the first one in nearly 11 years, with the last entry being Final Fantasy VII Advent Children Complete released in 2009. Multiple members of the original FFVII team are involved in the remake, including Yoshinori Kitase, Tetsuya Nomura, and Kazushige Nojima. External developer CyberConnect2 originally worked on the game, until Square Enix moved the game's development in-house.

Remake takes yet another step closer towards Square's dreams of making Advent Children's cinematic combat a player-controlled experience. Abandoning its turn-based roots, the game goes full Real-Time with Pause Action RPG. There's a Manual Leader, A.I. Party, and players are limited to attacking, dodging, parrying, using each character's Signature Move (Cloud's Stance System, Tifa's Charged Attack, etc), and switching to control of another character. To use Materia, Items, Summon Magic and other abilities, characters must expend a charge from their segmented ATB bar, which fills with attacks, parries and time. The game enters Bullet Time while the player is issuing orders. The ATB bar forms the heart of the combat engine's tension: you can take the safe, slow way and dodge a lot, or you can rush in... and expose yourself to counterattack. Each foe also has a Break Meter to exploit.

Remake features new exploration systems, completely new graphics in Unreal Engine 4, new assets, redesigned areas, additional characters, Evolving Weapons and Equipment-Based Progression, and new story content. It is also an Episodic Game: the first installment, released worldwide on April 10, 2020, encompasses only the original game's first five or so hours. While familiar characters are swept up in a familiar story, it becomes clear that someone is trying to push the plot Off the Rails, and someone else is Railroading them back into it — ending with a Cliffhanger that suggests Nothing Is the Same Anymore... and that the plot of this re-telling may turn out to be substantially different than the original.

An Updated Re-release titled Final Fantasy VII Remake Intergrade was released for the PlayStation 5 no June 10, 2021, and PC via Epic Games Store on December 16, 2021 and later via Steam on June 17, 2022. The rerelease features improved graphics, a photo mode, additional Bonus Boss fights, and the new "Episode INTERmission" chapter, a short sidestory centered around self proclaimed materia hunter Yuffie Kisaragi as she infiltrates Midgar during the reactor bombings, planning to carry out a mission for her homeland of Wutai to steal a rare Materia from Shinra's possession.

A tie-in novel titled Final Fantasy VII Remake Trace Of Two Pasts was released on July 15, 2021 with an English translation set to come out in November 2022. It explores Tifa and Aerith's pasts.