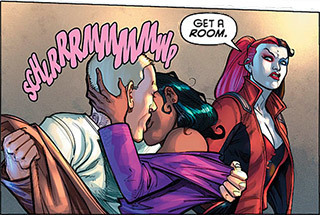 Stock Response to two characters acting in an unusually lovey-dovey way, or flirting (but generally what each character thinks of as covertly, since they often Cannot Spit It Out), or fighting. Occasionally used sincerely in the event of Coitus Uninterruptus, and in the other direction, also used on non-sexual friends (often but not always Heterosexual Life-Partners) by the resident Deadpan Snarker. Mood Dissonance, both to "get back to the comedy already!" in the first two versions and to keep viewers from becoming more titillated than they should be for the time slot.

A Sister Trope to Why Don't You Marry It?. In the rare semi-serious instances, it may forestall a couple from Making Love in All the Wrong Places and/or being Overcome with Desire.