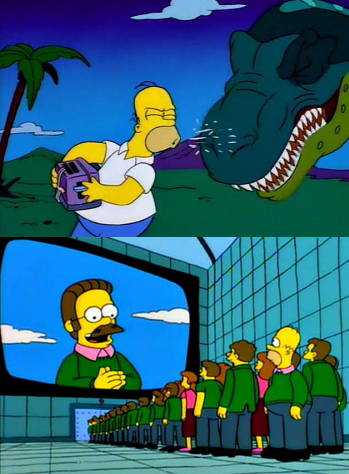 Remember, kids: don't sneeze on dinosaurs, unless you want your neighbor to be Big Brother.
"Don't do anything, don't touch anything. Sci-fi rule number 1: you start messing with the past, you end up with monkeys ruling the future."
— Cyborg, Teen Titans (2003), "Cyborg The Barbarian"
Advertisement:

Want to go back in time to stop your parents from losing their retirement money in the Dotcom crash? Save a loved one from a fatal accident? Nudge a closet a little to the left to avoid hitting your toe? In some universes, you're not just going to run into You Can't Fight Fate, but into Finagle's Law on a grand scale: the Butterfly of Doom. Any and every change made in the past will always have an unintended and horrible side effect, no matter how unlikely.

Much like a temporal Monkey's Paw, you might succeed at changing the thing you intended, but at a terrible cost. Telling your parents to move their money elsewhere gets them arrested for insider trading; the loved one you saved develops a wasting terminal cancer; the closet you moved is now on a weak floorboard and crashes through it, destroying your house. To repair the damage, it's usually necessary to travel in time again to Set Right What Once Went Wrong — more specifically, to set right what you made go wrong.

A Fantastic Aesop and a Sour Grapes trope, the Butterfly of Doom is intended to drive home that any attempt to change history will be met with the wrath of Fate itself, and you'll never end up better off. As a subtrope of For Want of a Nail, it can overlap with It's a Wonderful Plot, in which the butterfly is you. Godwin's Law of Time Travel is a subtrope in which the thing that you change leads to Hitler winning World War II.

This is one of the techniques that writers use to ensure that Time Travel doesn't interfere with Status Quo Is God. Others are that Time Travel creates Alternate Universes, that creating a Temporal Paradox obliterates reality or unleashes the Clock Roaches to eat offenders, and that Time is resilient and can absorb changes without breaking.

Not to Be Confused with another common trope resulting from the Butterfly Effect,

Disaster Dominoes, where a small accident or event sets off a whole chain of increasingly destructive events.

For the trope where a butterfly symbolizes one's death or resurrection, see Butterfly of Death and Rebirth.