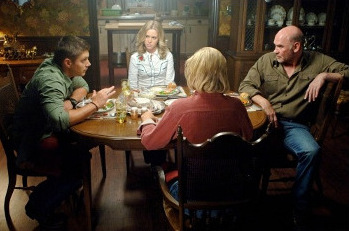 Three generations of the Campbell family.
You must stop it.
—Castiel to Dean Winchester
Advertisement:

Castiel sends Dean back in time, and quite vaguely tells him "to stop it". Dean wanders into a café, and ends up talking to his dad, John Winchester, who seems genuinely nice, and even buys Dean coffee. Dean pays him back by convincing him not to buy a van, but a certain Chevy Impala instead, and says his surname is Van Halen.

He thinks that something is after John, though, and follows him. He sees his mother Mary, who, in his own words, is a "babe", but also a kick-ass hunter. He's invited to dinner, meets his grandparents, and steals the Colt, so he can finally kill the Yellow-Eyed Demon, who will eventually kill Mary otherwise. Castiel appears, and reminds Dean if he kills Yellow Eyes, then he won't grow up to be a hunter, and all the people he saved won't be saved at all. Dean knows this, but fires ahead with the plan anyway.

Yellow Eyes has his own plans—he grants people a wish, and all he wants in return is permission. Permission to come into your house in ten years' time and bleed demon blood into your child's mouth, admittedly. Mary and her dad fight Yellow Eyes, and he takes a liking to Mary. Uh-oh. Eventually, Dean confides to his granddad what's going on, knowing that Yellow Eyes' interest in his mum will kill her, only to find out Yellow Eyes is possessing Granddad right then and there. Lucky Dean doesn't trust anyone with the Colt, not even family. Granddad and Granny are killed, and to top it all off, Yellow Eyes kills John Winchester.

The demon offers Mary a deal. He'll bring John back to life, at a price. Permission. Dean bursts onto the scene, but it's too late. Mary agrees to the deal, creating a Stable Time Loop and condemning them all to their fates without knowing it. Castiel returns, telling Dean that now that he knows how Sam got demon blood, he needs to stop him from using the powers, or they will. "They" being God's army of course.