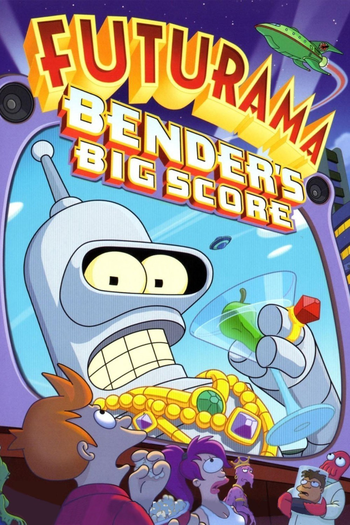 The first of a stream of Direct to Video films that would hopefully revive Futurama. Alien nudists take control of Planet Express through a series of Internet scams, and discover a paradox-free method of time travel tattooed to Fry's rear. They use Bender, who has unintentionally downloaded an obedience virus, to go back in time and steal history's most valuable objects, as there's no time traveling method of him getting back to the present, and he can just wait it out for a few hundreds of years. Fry eventually uses the time code to get back to the 21st century after Leela begins dating an older and more mature man by the name of Lars Fillmore.

A Bureaucrat's Brain in Action

Hermes coordinates an attack to the tune of the series' theme song.

A Bureaucrat's Brain in Action

Hermes coordinates an attack to the tune of the series' theme song.