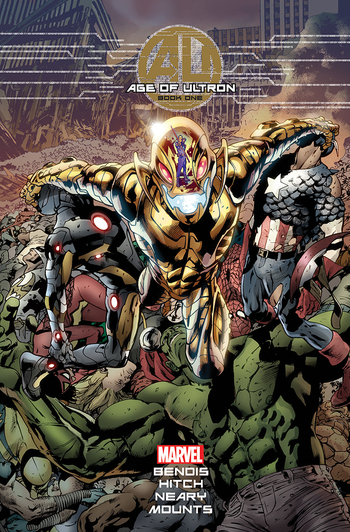 Age of Ultron (abbreviated AU) is a Marvel NOW! Crisis Crossover storyline written by Brian Michael Bendis and featuring The Avengers published by Marvel Comics, that involves the return of Ultron and his conquest of the Earth.

Suddenly and without warning, a Robot War of epic proportions was kicked off as Ultron made his grand attack on Earth, taking over the planet as a lifeless, mechanical world and forcing many of Earth's heroes — those that survived the initial assaults — into hiding. As Earth's heroes prepare to make a final assault, two heroes — Wolverine and the Invisible Woman — decide to take matters into their own hands and confront Ultron's creator, Hank Pym, before he could make the robot. However, are the consequences of these actions worth our survival?

The storyline had an odd concept with its tie-in issues. A number of titles, including Uncanny Avengers, Fantastic Four, and Superior Spider-Man, released a second numbered issue alongside the regular issue for that month, this one bearing an "AU" mark beside the number. Originally, they were meant to be one-shots, but were changed at the last minute.

A sequel dubbed Cataclysm: The Ultimates' Last Stand was launched in late 2013. The series sees the heroes of the Ultimate universe dealing with Galactus after he is teleported to their world thanks to Wolverine and Sue Storm's actions.

The Age of Ultron timeline was revisited as one of the worlds featured in Secret Wars (2015), with Ultron's drones battling the Marvel Zombies.

Not to be confused with the 2015 Marvel Cinematic Universe movie Avengers: Age of Ultron, which borrows the name of the crossover, but is not an adaptation. However, the What If...? (2021) episode What If... Ultron Won? is a more direct adaptation of the arc.

Age of Ultron provides examples of: