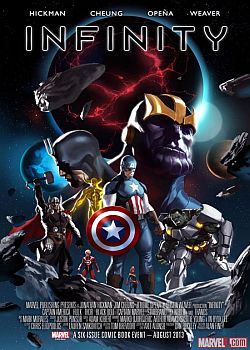 It will be enough... once you are no longer interested in asking that question. Once you are the god you were born to be. The supreme being before whom all life trembles. The destroyer who holds all of infinity in the palm of his hand, and isn't afraid to squeeze.
— Death, Thanos Rising
Advertisement:

Marvel Comics late Summer Blockbuster and Crisis Crossover event for year 2013, written by Jonathan Hickman. Rather than one story, it actually tells two, happening at the same time, both being natural consequence of events of Hickman's run on The Avengers and New Avengers, as well as set up to keep fans of The Avengers movie hyped for future film appearances of a certain One-Scene Wonder. It continues some plot points dating back to Secret Invasion, and despite what the name might have suggested to you, has no connection to The Infinity Gauntlet saga outside of Thanos playing a major role.

The Builders, a powerful race of god-like multidimensional beings, have invaded the Marvel Universe. The Avengers, in one of their strongest and largest incarnations, go to space and join forces with armies of alien empires against the threat before it reaches the Earth. To their surprise, the situation will force them into an uneasy alliance with many recent and former enemies, mainly the Skrulls, who, when they met last time, came within inches of taking over the Earth.

Speaking of Earth, without their strongest protectors, its defenses are weakened, making it easy prey for any invading forces. But in face of what's happening in space, who would bother attacking a lone planet when the invading Builders might bring about the death of everything?

With the majority of the Avengers off-planet, it's up to Black Panther, Iron Man and Black Bolt to organize Earth's remaining superheroes against the Mad Titan and his new generals, called Cull Obsidian, but also known as The Black Order.

The primary storyline was told across the six issue Infinity mini-series, The Avengers & New Avengers, all written by Hickman; and true to Crisis Crossover form, received tie-ins in various other titles, as well as being the impetus for the formation of a new Mighty Avengers team.