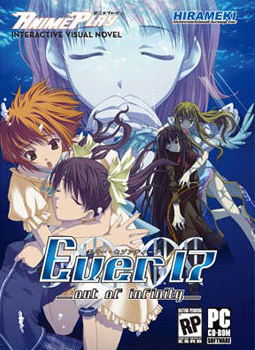 Ever17, the most well-known part of the series.
Infinity is a Visual Novel series originally developed by KID, and later transferred to Cyberfront after KID files bankruptcy during the development of 12Riven, who would finish the game and develop Code_18. The Infinity series was considered KID's flagship title, alongside Memories Off.

The series is a Thematic Series where no two works share characters or story elements. The only consistent theme is science fiction and varying levels of involvement of Time Travel. Outside of that, most of the games featured multiple protagonists with multiple perspectives and Mind Screw Jigsaw Puzzle Plots. Many of these themes can be traced to writer Kotaro Uchikoshi, who wrote the first four games. After 12Riven, Kotaro Uchikoshi went to Chunsoft and directed and wrote the Zero Escape series, where many of the story themes from his works in the series can be found, and can be considered a Spiritual Successor of a sort.

Another personality significant to the series is Takumi Nakazawa, director of the first three games. After leaving KID, Takumi Nakazawa went on to create the company Regista and direct and write the visual novels Input Output and Root Double: Before Crime * After Days. All of the said works also had similar themes with the Infinity series.

In addition, composer Takeshi Abo, who composed the music for the first four games, joined to 5pb. alongside other KID staff after KID's bankruptcy and would go on to compose the music for the Science Adventure Series.