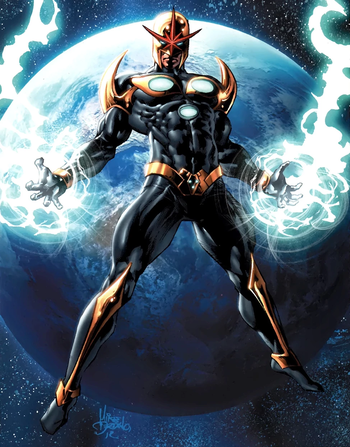 "I'm the ONLY guardian the galaxy needs!" 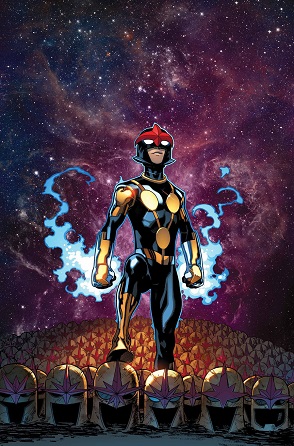 "Amazing! It’s everything dad talked about. The speed. The power. It’s like being a human rocket!"
Advertisement:

Richard Rider was a normal teenager, until one day he was chosen by a dying alien to carry his power, making him a member of Nova Corps – an intergalactic police force. Since then Richard has been known as Nova, The Human Rocket!

Nova is a Marvel Comics character. He first appeared in Nova vol. 1 #1 (September, 1976), created by Marv Wolfman and John Buscema, as a Homage to Stan Lee and Steve Ditko's run on Spider-Man, and to classic teenage superheroes in general. Nova's original series lasted for 25 issues (September, 1976-May, 1979), until he had to give up his powers to help Nova Corps rebuild their home planet, Xandar. Richard returned to Earth as a normal human, to lead a simple life again.

Or so he thought. Some time later Richard was approached by Night Thrasher, who proved that his powers weren't lost, only dormant... by dropping him from a building. Nova joined the New Warriors and developed a romantic relationship with his teammate, Namorita. After the New Warriors ongoing was closed, he fell into obscurity, reappearing only occasionally in solo adventures or new volumes of New Warriors.

In 2006 Richard was brought from Comic-Book Limbo for Annihilation, a Marvel big cosmic event that featured him as the central character and gave him a serious revamp – new costume, a Mentor persona in Worldmind and several additional levels in badass. Afterwards, he got a new ongoing series and was participating in various other cosmic events. He played a part in Annihilation: Conquest, Secret Invasion and War of Kings and joined the Secret Avengers.

His fourth series endured for 36 issues (June, 2007-June, 2010). Following its end, Nova played a big role in The Thanos Imperative, where he and Star-Lord stayed in the dying Cancerverse to keep Thanos from escaping. The three of them were presumed dead until eventually it was revealed that both Thanos and Star-Lord escaped. Much later it was revealed that Richard actually sacrificed himself to open a door that lead both Thanos and Quill back to their universe (along with Drax who was also in the Cancerverse).

A new Nova named Sam Alexander appeared for the first time in an special book called Marvel Point One, the story was a prelude to Avengers vs. X-Men, Marvel's big crossover event for 2012. A promotional comic explaining the sides of the event listed Sam as a wild card in the battle, along with the Incredible Hulk, Deadpool, Cable and Scarlet Witch. Eventually he sided with the Avengers but only appeared briefly in one scene attacking Cyclops. Later, a fifth volume, written by Jeph Loeb starring Sam was launched in February 2013, Loeb left after a few issues and was replaced by Zeb Wells who also left after a few issues, following which was Gerry Duggan, who during his tenure kept the title afloat and increased Sam's fanbase (particularly with some of Richard Rider fans).

In 2015, a new, alternate reality version of Nova named Anwen Bakian debuted in the Secret Wars (2015) crossover. She proved a small hit, but hasn't been seen or referred to since.

In 2016, a new Nova series starring both Sam and Richard launched under the helm of Jeff Loveness and Ramón Pérez. Considered a hit by both Sam and Richard's fanbases (other than Sam's perennial Hate Dumb who have never abandoned their hatred for Sam), including bringing over a number of the dissenters and readers who were still on the fence regarding Sam's character. Alas, it didn't last long, getting cancelled and being forced to wrap itself up prematurely by its 7th issue.

The Nova Corps appear in the 2014 film Guardians Of The Galaxy, though they are depicted somewhat differently than in the comics; still an intergalactic police force, but with no superpowers.

Prior to the release of Avengers: Infinity War, Kevin Feige of Marvel Studios expressed interest in a potential Nova movie in the future as part of the Marvel Cinematic Universe, but any details on the project (including whether or not it exists) aren't yet disclosed.