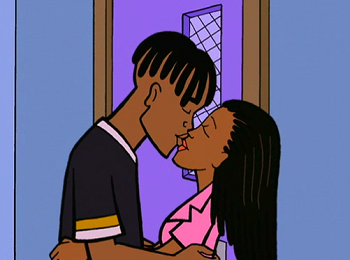 "Hey there, other black person in the room. Wanna engage in a little... desegregation?"
— The Nostalgia Chick, pointing this out in Jem
Advertisement:

When the writers want to give the Token Minority a love life, but are in a bind because either A) most of the character's options are already taken, or B) the writers (or producers) would rather avoid the controversy of interracial romance. Thankfully, the latter isn't much of an issue anymore, although it hasn't entirely gone away, but there remains some instances of "Like Goes with Like" in fiction.

This comes in two varieties:

It is Not a Subversion if the lovebirds are different minority races. For example, it's been a pretty common Hollywood practice since the '90s to give a black lead a Hispanic love interest, to avoid the Minority Show Ghetto or the perception of strict racial divides, if the show has a diverse cast, but without the cultural baggage of pairing them with a white person.

Homo/bisexuality is the most common non-racial variant. This can be tricky since a same-gender love interest must by necessity be sexually compatible, so the key thing to look for is if their relationship develops at a realistic pace and the character is subtly introduced, or if Billy Queer just pops up and is clearly going to get in the token gay's pants. But if the show features two gay/bi characters of the same gender with no real connection to each other and no reason to start dating, it's another straight example if they get in bed.

Another variant happens in the World of Funny Animals, where everybody is a different anthropomorphic animal, but no matter how anthropomorphic, they are, only those of the same exact species will truly hook up. For example, Bob Kitty is the only cat in the show and has no love interests until Alice the cat shows up. This is less Fantastic Racism and more to avoid the potential Squick of an Interspecies Romance. note  Some stories that aren't aimed at children will state that the mother's species determines the child's, rendering the point moot

See also Same Race Means Related, which includes cases where a new racial/ethnic minority character is related to (or assumed to be related to) an existing one.

It is unnecessary to list aversions since that tends to mean rattling off the character's entire dating history.