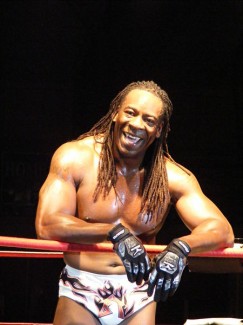 Booker T (born Robert Booker Tio Huffman, March 1, 1965) is one of the most decorated wrestlers of all-time, having wrestled for World Championship Wrestling, World Wrestling Entertainment and Total Nonstop Action. Over the course of his career he's had six runs with a World Title (5 with WCW's World Heavyvweight Title

), and been a Grand Slam Champion in WCW (WCW World Heavyweight Title

) and in WWE. He is also a former King of the Ring. He was the General Manager for SmackDown, and serves as one of the trainers on WWE Tough Enough. Also, he's a part of the Hall of Fame class of 2013 and was later inducted again alongside Stevie Ray as part of Harlem Heat in the class of 2019.

Beyond the ring, he's tried his hand at booking, or at least has ownership with his wife Sharmell, having established the Pro Wrestling Alliance in Houston, which was later replaced by Reality Of Wrestling.

Do not confuse him with Booker T. Washington, or Booker T. Jones of Booker T. and the MGs.