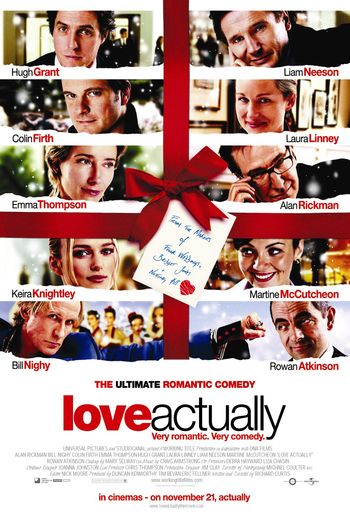 Love and Christmas are all around.
"General opinion's starting to make out that we live in a world of hatred and greed, but I don't see that. It seems to me that love is everywhere. Often, it's not particularly dignified or newsworthy, but it's always there: fathers and sons, mothers and daughters, husbands and wives, boyfriends, girlfriends, old friends. When the planes hit the Twin Towers, as far as I know, none of the phone calls from the people on board were messages of hate or revenge; they were all messages of love. If you look for it, I've got a sneaky feeling you'll find that love actually is all around."
— The Prime Minister
Advertisement:

Love Actually is a British 2003 Romantic Comedy written and directed by Richard Curtis, featuring an All-Star Cast and set during Christmas time in and around London.

The film revolves around several different people and their relationships, all woven together. Among the myriad plotlines, we see:

While not all of its stories feature Happily Ever After endings, the film as a whole is unabashedly sentimental and quickly became a holiday staple, particularly in Ireland and the UK.

A ten-minute Short Film sequel has been aired as part of Red Nose Day 2017, with most of the original cast returning.