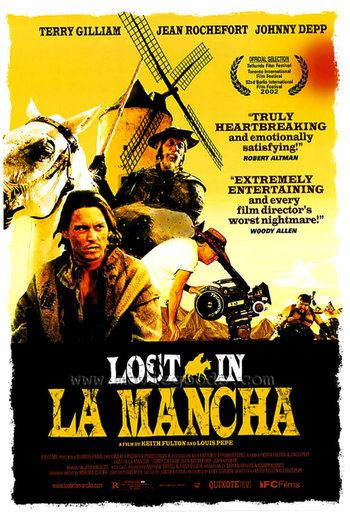 Lost in La Mancha is a making-of turned documentary film directed by Keith Fulton and Louis Pepe and released in 2002. Narration is provided by Jeff Bridges.

It chronicles director Terry Gilliam's disastrous first attempt at filming The Man Who Killed Don Quixote in 2000. The project was a fantasy-adventure-comedy inspired by the Miguel de Cervantes novel The Ingenious Nobleman Don Quixote of La Mancha and was set to star Jean Rochefort as Don Quixote and Johnny Depp as Toby Grisoni.

It was shot with the purpose of being the film's making-of, but the failure in getting the movie made back then led it to be retitled Lost in la Mancha and to be released independently as a one-of-a-kind "unmaking-of" documentary.

The Man Who Killed Don Quixote eventually resumed filming with a new cast in 2016 and was released in 2018, a testament to Terry Gilliam's sheer determination in finishing his passion project. A sequel to Lost in La Mancha, titled He dreamed of Giants, by the same directors and dealing with Gilliam's mindset and determination, was released in 2019.

Lost in La Mancha provides examples of the following tropes: