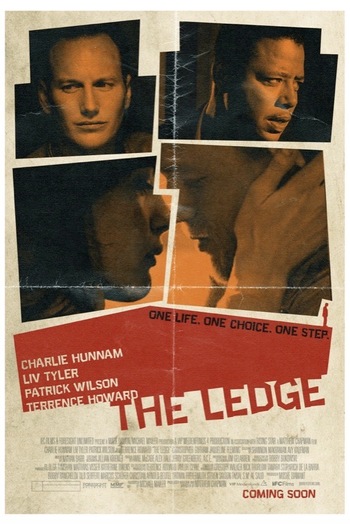 "One life. One choice. One step."
—Tagline
Advertisement:

Experienced cop Hollis Lucetti (Howard) is having a really, really bad day. First he finds out that he's sterile — so his two kids can't possibly be his own. And then there's Gavin Nichols (Hunnam), who is standing on a ledge, preparing himself to jump to his death. It seems like Gavin doesn't really want to die, but believes that someone else will die if he doesn't jump.

The situation is quickly revealed to be about a Love Triangle. Two men, one woman, and it seems likely that at least one of the three is insane. Gavin and Joe are fighting over Shana (Tyler). Gavin is her employer and also an atheist, Joe (Wilson) is her husband and also an evangelical Christian. But is their conflict really about the woman, or is it about their clashing beliefs?

The story is mostly a psychological drama with heavy focus on philosophy. Especially the interaction between worldview and self-image. The film also has an obvious thriller element, although this is a far smaller part of the story than the second scene would have the audience believe.

Because of its themes, the film was heavily promoted as one of the first in which the hero is an atheist which doesn't fit with the existing preconceptions of atheists in fiction.

Not to be confused with Man on a Ledge or Stephen King's short story.