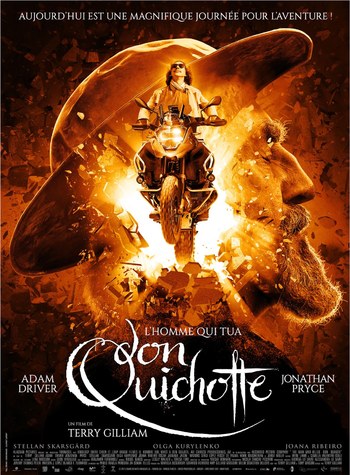 "I am Don Quixote!"
Advertisement:

The Man Who Killed Don Quixote is a film directed by Terry Gilliam, and written by Gilliam and Tony Grisoni. It is a fantasy-adventure-comedy inspired by and themed after The Ingenious Nobleman Don Quixote of La Mancha, the landmark novel of Spanish literature by Miguel de Cervantes.

It tells the story of a movie director, Toby Grisoni (Adam Driver). He's in Spain, in La Mancha, filming a vodka commercial themed after Don Quixote, and fears his affair with Jacqui (Olga Kurylenko), the wife of his boss (Stellan Skarsgård), might be discovered. He decides to visit the village where his student project, The Man Who Killed Don Quixote, took place ten years before — he filmed it using locals instead of professional actors. There he meets the old shoemaker who he chose to play Don Quixote, Javier Sanchez (Jonathan Pryce), who has become completely mad, thinking he is the literary hero, donning an armor and mistaking Toby for his trusty squire, Sancho Panza.

The pair then embark on a bizarre journey, with Toby jumping back and forth in his mind between the 21st and 17th centuries. Gradually, like the infamous knight himself, Toby becomes progressively consumed by an illusory world and soon unable to distinguish dreams from reality.

The project became known as one of the most infamous cases of Production Curse in the history of moviemaking, with Gilliam unsuccessfully attempting to get it off the ground a total of eight times over the span of nearly three decades. Pre-production started all the way back in 1991. A first filming attempt happened in 2000 and failed due to unpreparedness, bad luck and various other problems getting in the way. That particular disaster was chronicled in the documentary Lost in La Mancha, which was initially intended to be the movie's making-of.

After many years (and following some other projects of Gilliam that also ran into troubled productions), a successful shooting eventually started in October 2016 and completed in June 2017. The film premiered on May 19, 2018 in France during the closure of the Cannes Film Festival, followed by wide releases in some other European countries. Its eventual US release was a one-night theatrical showing on April 10, 2019. A sequel documentary to Lost in La Mancha, titled He dreamed of Giants, by the same directors and dealing with Gilliam's mindset and determination in finishing the film, was released in November 2019.

The Man Who Killed Don Quixote provides examples of: