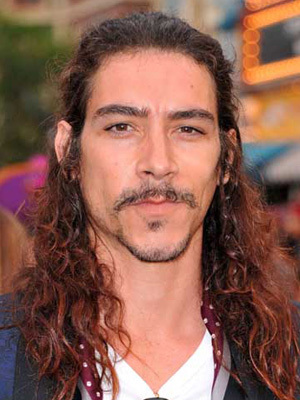 Someone make a note of this man's bravery.
Óscar Jaenada Gajo (born 4 May 1975 in Catalonia, Spain) is a Spanish actor. He started his career as a prolific stage actor, but hard times led him to move to TV become an usual actor invaried Spanish series like 7 Vidas, Compañeros and Hospital Central (the national version of General Hospital), eventually expanding his range to films. His true breakout came when he played popular Gypsy singer Camarón de la Isla in his 2005 biopic, gaining him a Goya Award and the popular belief that he's a Gypsy himself (which he isn't, only looks like one).
Advertisement:

He has become an usual option for American filmmakers seeking the nearest to a Dashing Hispanic they can find in modern cinema, better exemplified by a show-stealing role as an unnamed Spanish captain in Pirates of the Caribbean: On Stranger Tides. He's also put often to play other Hispanic nationalities (and Gypsies).

Tropes and trivia about his career: