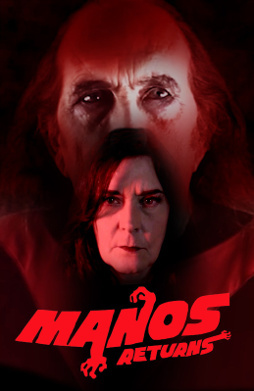 "There is no way out of here."
—Torgo
Advertisement:

Manos Returns is a 2018 sequel to the notorious low-budget horror movie Manos: The Hands of Fate, directed by Tonjia Atomic. It continues the story of the original movie over fifty years later, with Jackey Neyman Jones, Diane Adelson, and Tom Neyman reprising their roles as Debbie, Margaret, and The Master respectively.

The film is the result of a Kickstarter campaign organized by Jackey Neyman Jones, owing to the original film's cult popularity. It sadly constitutes the final screen appearance of Tom Neyman, who passed away shortly after filming concluded.