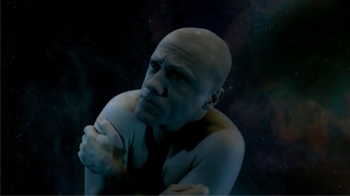 Qohen Leth is an eccentric and reclusive computer genius who lives in an Orwellian corporate world and suffers from existential angst. Under the instruction of a shadowy figure known only as "Management", Qohen works to solve the "Zero Theorem" — a mathematical formula which will finally determine whether life has any meaning. Qohen's work in the burnt-out chapel that serves as his home is interrupted by visits from Bainsley, a seductive woman, and Bob, the teenage son of Management.