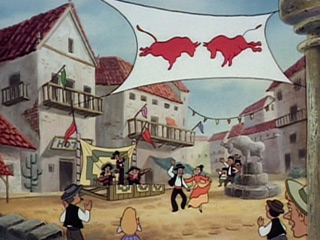 Bulls and the flamenco... the Hollywood Atlas version of Iberian countries (mostly Spain with possible addition of elements from Portugal, Andorra, Gibraltar and southern France).

You know, that place where all the women dress in tiered skirts, and all the males in chaqué, where the landscape consists of mountains, red dry hills and beaches, and every night (because there's siesta all day anyway) passionate Tall, Dark, and Handsome toreadors with roses in their teeth escape from stampeding bulls while playing guitars, and equally passionate Spicy Latina Gypsies with roses in their hair, daggers in their garters and fans in their hands throw oranges at them while dancing flamenco. ¡Olé!

If you don't know why this trope fails that much at Geography, you should know that the Running of the Bulls (celebrated on the week beginning the 7th of July on the day know as "San Fermín" and ending on the midnight of the 14th of July) is celebrated only in Pamplona. The "Feria de Abril" (April Fair) where women actually dress with tiered spotted skirts and men wear chaqués is celebrated only in Seville. The distance between those cities is over 600 miles, the former being at the north, and the latter being at the south.note And bullfight tradition is not extended the same way across all Spain. On its northernmost regions is usually less or even far less extended than in central or southern Spain, even if you can find plenty of bovines there - for their milk and meat. Not to mention that younger generations tend to either ignore or vilify the practice and see it as outright animal cruelty due to it involving slowly killing the bull in most cases. The running of the bulls tends to be much more accepted though, as unlike bullfighting it doesn't involve the death of the bulls. Yet in fiction, both seem to happen at the same time and place. Also, Spain is not all dry semi-desert — the northern strip between Catalonia and Galice is mostly standard European temperate forest.

Additionally, the Running is often portrayed as featuring hundreds of bulls on a murderous stampede. In Real Life, though, there's generally no more than fifteen bulls, released in groups of four to six, and they're often surrounded by a larger crowd of people, including a group running around them to keep them following the right path. Bonus points if the work even decides to portray the correct path they follow, or simply has them rampaging freely through any of the city's streets and wreaking havoc.

Meanwhile, the music department will invariably and uniformly consist of Flamenco, or something aiming to sound like Flamenco, with Spanish guitar, castanets, tap-dancing and "deep song

". In Real Life, this music style originated in Andalusia and the city of Seville in particular. Elsewhere in Spain, it is practically a niche genre associated with Roma peoplenote Almost half of Spain's Roma live in Andalusia and Andalusian immigrants and their descendants.

Toros Y Flamenco is one of the most popular origin countries for a Latin Lover.

See also Latin Land, which shares many elements with this trope, due to strong historical and cultural ties between Iberia and South American countries, and Spaghetti and Gondolas and Ruritania, for the stereotypical versions of the other parts of Southern Europe. Sometimes confused or amalgamated (by hack authors) with South of the Border into Spexico due to the same strong historical and cultural ties plus the similar climate. The association of bulls with these countries falls under National Animal Stereotypes.

Sometimes coincides with It's Always Mardi Gras in New Orleans, when a visit to Pamplona (or any other town in Iberia if the author is particularly lazy) is destined to happen exactly on the week of the Running of the Bulls.

In Real Life Spain this trope is known as una españoladanote Which is "Spanish", plus the the suffix -ada ("español" + "ada"). This is the normal construction in Spain for referring to national stereotypes in general. For example, for referring to American stereotypes, it would be "americanada" ("americano" + "ada"). or the even more derogatory España de pandereta ("Tambourine Spain").note Which is also used in debate to criticize the social and/or politic ordeals associated with Spanish culture.