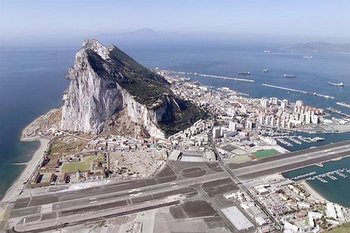 "The Catholic King does hereby, for himself, his heirs and successors, yield to the Crown of Great Britain the full and entire propriety of the town and castle of Gibraltar, together with the port, fortifications, and forts thereunto belonging; and he gives up the said propriety to be held and enjoyed absolutely with all manner of right for ever, without any exception or impediment whatsoever."
—Treaty of Utrecht, Article X

A small peninsula located on the Mediterranean coast of the Iberian Peninsula near the southern tip of Spain, Gibraltar is a British Overseas Territory in Southern Europe, and was where the Moors first landed in Europe (the name "Gibraltar" may be derived from the Arabic phrase Jabal Tariq, literally Tariq's mount, after an early leader of the Muslim conquest of Iberia), dominated by the famed Rock of Gibraltar

. It is the only part of the UK in mainland Europe, and one of the only two British territories where people drive on the right side of the road, the other being the British Indian Ocean Territory.

It probably had lions at some point.

It's famous for the Barbary Macaque or "Barbary Ape" (actually monkeys), which are the only European monkeys. Legend has it that during Spain's Great Siege during The American Revolution, a rather trope-heavy defense of the fortress and Britain's only major success of the war, Moroccan blockade runners opposed to Spain brought limes in their dhows... and monkeys. In this way the monkeys became symbols of British rule, and during World War II, when their population was in decline, it is said that Winston Churchill authorized Emergency Monkey Relief. Perhaps this is not true, but it should be. These days, the monkeys primarily steal food from tourists.

The British conquered the place in 1704 from Spain. The Spanish want it back, or at least dual sovereignty. The locals are highly against that (rejecting the proposal received just under 99% of the vote, and Britain stated they will not enter into any agreement without strong support from locals), and they back up their argument rather convincingly with a piece of paper signed in 1713 by Spain at Utrecht giving up possession of Gibraltar forever. Spain has periodically attempted to retake the Rock by force, such as during the aforementioned Great Siege, the longest endured by the British military (4 years), which saw feats of gallantry from both sides. During World War II, Adolf Hitler offered it to Francisco Franco in exchange for his support of the Axis war effort. Franco, however, demanded both Gibraltar and the remnants of the French Empire, which Hitler wasn't prepared to promise. Franco's intransigence was helped by the British bribing him and his top generals a vast amount of money into staying out.

AKA The Rock, it remains an important military location for the British Armed Forces. Gibraltar has over the years become synonymous with the notion of an impregnable fortress, with other prominent fortresses and military bases around the world ending up with the nickname "the Gibraltar of X". As one of the Pillars of Hercules, it is a vital access point from the Mediterranean into the North Atlantic. (Rather ironically, one of the proposed African Pillars of Hercules is... Monte Hacho, in Ceuta, which is a Spanish territory that would but for the vagaries of history be in Morocco. Naturally, the Moroccans are about as pleased with this arrangement as the Spaniards are about Gibraltar.)

Examples of Gibraltar in media:

Unlike most British Overseas Territories, this flag is not a British Ensign. Instead, it consists of a white stripe twice as wide as that of the red below. At the center is a red castle with three towers and a golden key dangling below, symbolizing both the fortress-peninsula itself and its strategic position as one of the Pillars of Hercules, respectively.