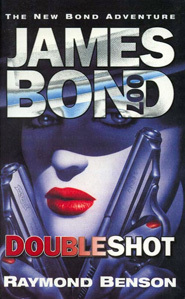 The sixth James Bond novel (the Novelization of the film The World Is Not Enough being the fifth) by Raymond Benson, published in 2000.

Thanks to the events of High Time to Kill, the Union has lost face and seeks revenge on Bond. When they are approached by a politically ambitious mobster who wants Gibraltar back to Spain, they set in motion a plan that will not only strike against Bond, but his country as well.