Literature / You Only Live Twice 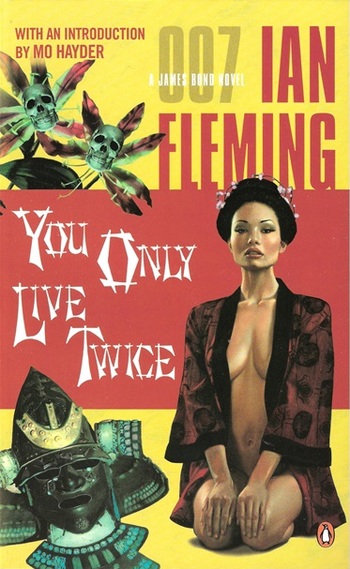 The twelfth James Bond book by Ian Fleming, published in 1964.

Eight months have gone by since the events of the eleventh book, and Bond's a wreck who can barely keep his job. In order to help, M gives him a promotion and sends him on a tough diplomatic assignment to Japan to get information that would benefit England out of Tiger Tanaka, head of the Japanese secret service. He and Tanaka become pals, and soon Bond finds himself doing a job for Tanaka: assassinate one Dr. Shatterhand, a man "who collects death".

The book's title was used for the fifth James Bond film, but the film's plot differed widely, only retaining Blofeld and the Japanese setting. The film version was written by Roald Dahl. Yes, that Dahl. Elements unique to the novel were finally adapted in movie form in No Time to Die in 2021.